The diesel locomotive DR Class V 100 belongs to the type C''C'. It has three coupled driving axles each in two different frame bogies.

The diesel locomotive DR Class V 100 (from 1970: class 110) is a locomotive for medium service on the Deutsche Reichsbahn.

The history of the diesel locomotive DR Class V 100

The result was a four-axle diesel locomotive with a central driver’s cab and hydraulic power transmission, which was produced by the locomotive manufacturer Karl Marx Babelsberg.
The first model from 1964 with blue paint scheme still had the 900 HP engine from the well-known V 180. The second model from 1965 in red paint scheme already contained the 1000 HP engine of the type 12 KVD 18/21 A-3 from VEB Motorenwerk Johannisthal. However, the Deutsche Reichsbahn did not adopt these two types. The two locomotives were destroyed in 1968 in a major fire in Raw Cottbus. The numbers already in use were later replaced.

For capacity reasons, series production of the BR V 100 diesel locomotive did not take place at Lokomotivbau Karl Marx Babelsberg, but at Lokomotivbau Elektronische Werke Hans Beimler Hennigsdorf (LEW Hennigsdorf). In 1966, another sample locomotive (V 100 003) was developed there. This third and oldest locomotive is now located at the Förderverein Berlin-Anhaltische Eisenbahn in Lutherstadt Wittenberg. It is on loan from the DB Museum Nuremberg and has the original paintwork, cream with green stripes. In addition, this locomotive has a more pleasing design of the upper part of the engine hoods. On the series machines, the upper side of the cover of the engine plant only resembles a very flat gable roof. On the machines produced later, only one “belly band” was applied during painting instead of two, which required less white paint during the covering work. One year later, series production of the DR Class V 100 diesel locomotive started, and the locomotives produced included the numbers V 100 004 to 171. 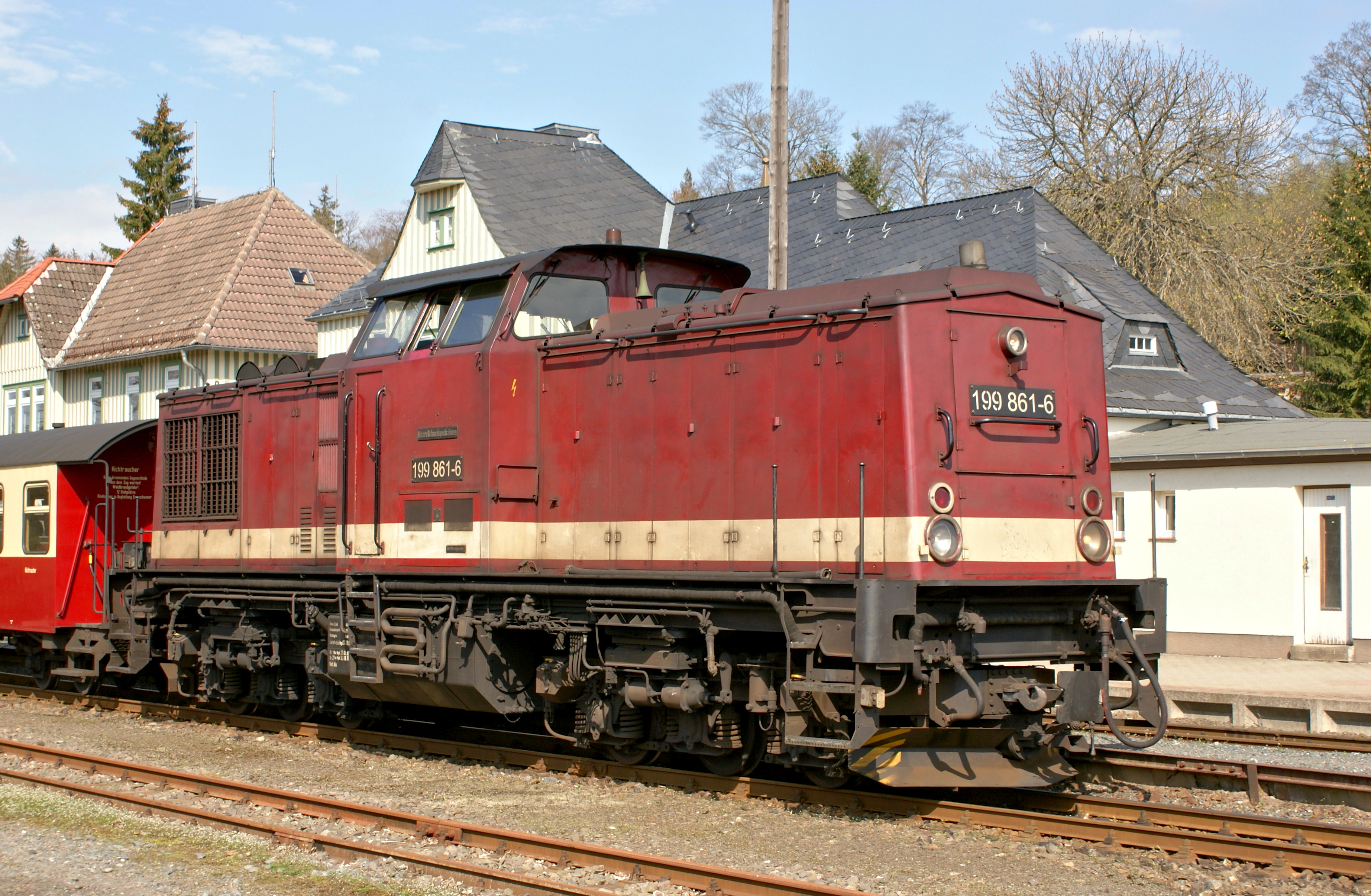 For the narrow-gauge railway in the Harz mountains, ten locomotives of the type V 100.2 with an 800 serial number – the number remained unchanged – were converted to metre gauge. Since then they have been listed as class 199.8 and replaced the steam locomotives used there. The Deutsche Reichsbahn initially planned a conversion/operation of thirty machines.

For use on secondary lines with lower axle loads, attempts had been made to reduce the mass of the locomotives. In order to achieve this, the step gearbox was dispensed with. This made it possible to reduce the operating mass to 63 tonnes. In this version a total of 696 locomotives were built between 1969 and 1978. The first one got the number V 100 201 and the last one then with the new series designation 110 896.

In the following years, the DR Class V 100 replaced almost all of the Länderbahn locomotives in the medium power range and was used in front of all types of trains throughout the GDR. The last locomotive built in 1978 was the 110 896.

After the merger of the DR with the DB, the locomotives were surplus in passenger service like their DB counterparts. In addition, there were problems with rolling over. These were due to hollow running of the wheel profile. The rolling problem occurred mainly on newly installed rails with a ground running surface. The locomotives swayed at higher speeds. For this reason, the permissible maximum speed was reduced to 80 km/h for this series. Many locomotives were switched off, as the reduced speed meant that they could only be used on main lines to a limited extent. Some of them were later retrofitted with roll dampers on the bogies.

A total of 1146 locomotives were built.

(internal factory designations of the variants, not to be confused with the series numbers)

The DR Class V 100 diesel locomotive runs on two bogies, each of which is articulated via a pivot pin. The main frame is supported on these bogies by coil springs with sliding plates. In the first series up to loco V 100 103 two fish-bellied beams were used. In the later series the fish-bellied beam was omitted, which reduced the mass by 1.8 tons. This in turn led to the suitability for lines with 1.5 t axle load.

Like its DB counterpart, the locomotive has a middle driver’s cab. The diesel engine and the cooling system are located in the front front end. The air generator, the light starter, the switch cabinet 3, the air frame, the air tank, the batteries, the boiler (or corresponding preheating devices), the ballast weights, as well as the train control system and usually also the train radio are located in the rear front end.

In the vehicle frame under the driver’s cab hangs the airflow transmission. It is connected to the engine via a cardan shaft. The transmission has one starting and two marsh converters, as well as a reversing gear. The first locomotives of the V 100 0-1 series still had a stepped transmission which offered the option of mainline and shunting gear. This transmission was dispensed with from 1969 onwards, as this series, with the exception of the later substructure types such as the 108 and 111, was hardly ever used for shunting service. From the transmission, further power is transmitted via cardan shafts to the final drives. In addition, the wheelsets of a bogie are connected to each other via a further cardan shaft. The fuel tanks are located to the left and right of the transmission.

The DR Class V 100 diesel locomotive is double traction capable. For this purpose, the speed of the original diesel engine is adjusted electromechanically. Six speed levels can be preselected at the driving switch, which an electric speed adjuster then sets at the regulator of the block injection pumps. The maximum speed of the locomotives is 100 km/h, which was however reduced to 80 km/h at the DB.

The train was heated by an automatically operating low-pressure steam boiler installed at the rear end of the locomotive. The feed water was treated on board by an ion exchanger. The boiler was originally controlled by a relay logic (RELOG control). In the 1970s this was modernised to the transistor-diode logic, TRANSLOG control. The conversion of the vehicles was carried out step by step. At the end of the 1980s, practically no new components were available. So it was inevitable to develop a replacement again. A new relay control system was designed in order not to fall victim again to a faster technology sequence. Starting with the second series, V 100 004-103, there were structural changes. The cover of the stems protruded beyond them and was fastened with rubber quick release fasteners. 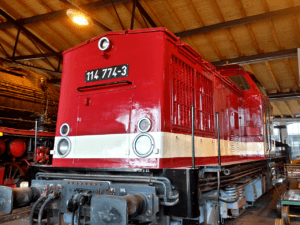 Further machines were sold to subsidiaries of Railion (today DB Cargo). The locomotives 204 366, 399, 492, 616 and 626 were stationed at Railion Nederland. They were used there for freight transport on Dutch lines. Today, locomotives of this series also operate in Bulgaria and Romania.

The MEG 103 was given on loan to the Salzwedel steam locomotive enthusiasts. It is parked at the Wittenberge depot.

Two more class 110 locomotives were converted to a hydrodynamic reversing transmission for heavy shunting service at Raw Stendal in 1978. The transmission had two forward and two reverse converters each, which could be used for dynamic braking. In this way, wear on the brakes and wheel tires could be reduced and directional changes accelerated. In addition, the locomotives were fitted with consumption-optimized engines with a power output reduced to 760 hp. These engines did not prove their worth and were replaced again. During the tests the locomotives were redesignated to the numbers 108 001 and 002 and thus got their original locomotive numbers back. In 1985 they were re-drawn again, only this time with the original serial numbers. Since these locomotives were used in shunting service, the boilers were removed and the colouring changed. In the beginning, the type locomotives only had orange contrasting surfaces on the fronts. Later, the bodies of both locomotives were painted completely orange. Initially, these two locomotives were also painted orange. The 108 002, later 108 161, received a side-operated driver’s cab with a modified entrance. This is how it differed from the original design. In 1992 the locomotives were given the class designation 298 and in 1997 radio remote controls were installed.

1981 saw the start of delivery of the 111 series to DR. Since these locomotives were intended for heavy shunting service, the train heating system was removed and a ballast weight was installed instead. The permissible maximum speed was reduced to 80 km/h and 65 km/h respectively. The speed was reduced in favour of the increased tractive effort by changing the gear ratio. By 1983, 37 locomotives had been built. In 1992 the locomotives were given the class designation 293, if they had not already been converted to the class 298.3 before. By 1993, however, all locomotives had been converted to the 298.3 series.

In 1990, after long testing of the two locomotives of class 108, it became apparent that the hydrodynamic reversing transmission would also be suitable for heavy shunting service, so the 111 036 and 037 were converted to further type locomotives of class 108. In 1991, the standard conversion began and with it the conversion to class 298.3. By 1993, the conversion of all locomotives was completed. From 1996 to 1998 there was also a conversion to radio remote control. Two locomotives escaped conversion because they were sold to the Thüringen/Unterwellenborn steelworks. All converted locomotives equipped with MICAS safety computers have two side-operated joysticks on each side instead of the V-100 driving switch handwheel for the engine speed. They are used for driving forwards and backwards. Some locomotives have been equipped with the Vconst gearshift to simplify operation on the hump. In 2005, the previously installed engines were replaced with new Caterpillar engines with 772 kW (1050 hp). In 2007 a further 21 engines were re-powered. They received a new main drive shaft, a new cooling circuit and a modified exhaust system with new silencer.

Starting in 1981, ten locomotives (from locomotive number 110 961) were built for the DR with engines with an output of 736 kW (1000 HP). They had a power take-off which was installed in the front front end. These machines were used to drive trench clearing units (GRE) and high-performance snow blowers (HSF). These locomotives were not part of the DR’s operating base, but were part of the superstructure (Obw). From 1992 they were given the class designation 710 and from 1994 they were sold to private construction companies. The auxiliary drive was removed again. 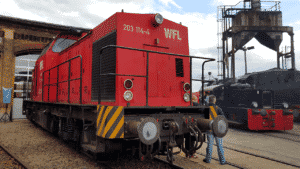 The Alstom plant in Stendal has taken over many of the locomotives taken out of service by the DB. The vehicles are reconditioned according to customer requirements and are offered in different versions, e.g. with original engines or alternative engines and control systems. Conversion to the maximum speed of 100 km/h is offered as an option. Some railway companies refer to these locomotives as class 203. The locomotives can be bought, leased or rented. Depending on customer requirements, the locomotives can have new bodies or additional equipment. A hybrid version was also presented. Many former works locomotives have also been rebuilt, in some cases with considerably modified bodies.

At Deutsche Bahn, in addition to DB Netz and its maintenance subsidiaries, DB Regio also had class 203 locomotives in its inventory. These were mainly located in Nuremberg, Regensburg and Würzburg. The Regensburg locomotives were in service for Railion in Regensburg East. The S-Bahn Munich used the 203 002 as a towing locomotive. It has not been in service since 2013.

Deutsche Bahn has discontinued or sold all locomotives of the V-100 family.

The stock of class 203 in NE railways grew steadily. The largest stocks are held by Eisenbahn-Bau- und Betriebsgesellschaft Pressnitztalbahn mbH (PRESS), MItteldeutsche Eisenbahn and Spitzke AG. Five class 203.1 locomotives were leased by SBB Cargo from Alstom Lokomotiven Service (ALS). They were given the SBB Cargo livery and can be found at the Dillingen, Cologne and Fribourg locations.

59 locomotives were modernized by ADtranz between 1995 and 2002 to class 293. The locomotives also received new engines from Caterpillar or MTU. All existing gensets were reconditioned. New was the hydraulically driven cooling system. For several locomotives, new operating books had to be created, since the original locomotive could not be identified. According to this concept, two further machines were converted by different workshops.